Derbyshire County Cricket Club – “We Will Remember Them” 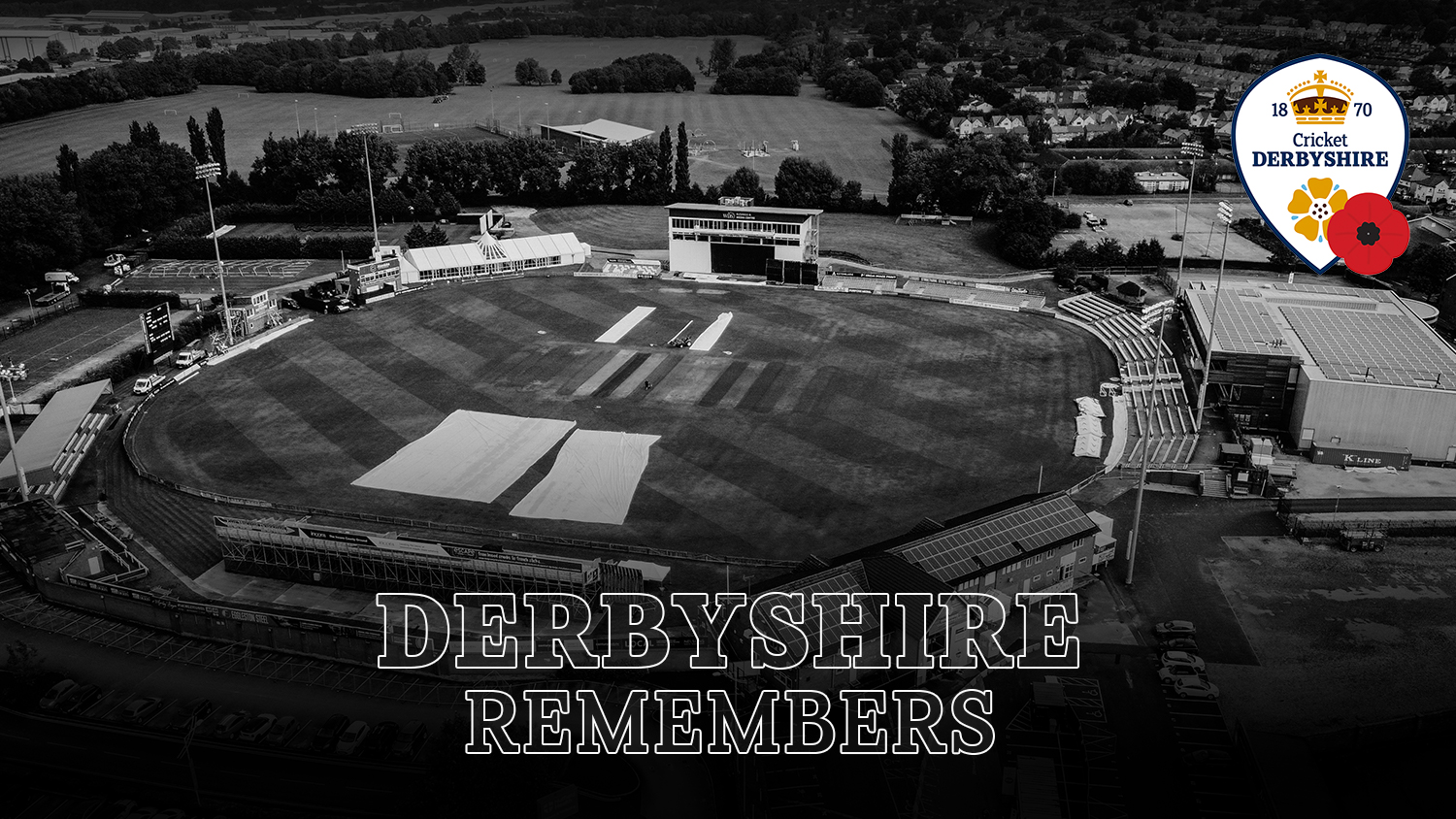 Thursday 11 November 2021, marks 103 years since the end of the First World War. Each year, Derbyshire County Cricket Club honours those who paid the ultimate sacrifice in all conflicts by the laying of wreaths in a variety of locations around the county.

Heritage Officer, David Griffin, takes a look at the Derbyshire cricketers who served their country during the two world wars, beginning with those who paid the ultimate sacrifice.

During the First World War 6 Derbyshire cricketers, and one player expected to play for the county in 1915, lost their lives.

Captain Frank Miller Bingham was killed in action on 22nd May 1915, aged forty, and is honoured at the Ypres (Menin Gate) Memorial in Belgium. Bingham played in one match for Derbyshire in 1896.

Sergeant Major Henry (Harry) George Blacklidge died from dysentery in Amara, Mesopotamia – now Iraq – on 23rd May 1917 aged thirty-two and is honoured at the Amara War Cemetery in Iraq. Blacklidge had played seven first class games for Surrey between 1908 and 1913 and was appointed coach to Derbyshire’s newly formed cricket nursery in 1914 and was due to play for the county when qualified but was prevented by the outbreak of war.

Sergeant Charles Barnett Fleming died of wounds in Grevillors, France on 22nd September 1918 aged thirty-one. He played one match for Derbyshire in 1907.

Captain Geoffrey Laird Jackson was killed in action at Arras, Belgium on 9th April 1917 aged twenty-three and is honoured at the Highland Cemetery, Raclincourt, Pas de Calais, France. Jackson played four matches for Derbyshire between 1912 and 1914. A brother and cousin both also played for Derbyshire.

Lance Corporal Arthur Marsden died in London on 31st July 1916 from wounds received in The Somme, aged thirty-five. He played one match for Derbyshire in 1910.

Lieutenant Charles Niel Newcombe was killed in action in Fleuraix, France on 27th December 1915, aged twenty-four. He played one match for Derbyshire in 1910.

Captain Guy Denis Wilson – was killed in action in Camrai, France on 30th November 1917, his 35th birthday. Wilson played two matches for Derbyshire in 1902 and 1905.

“At the going down of the sun, and in the morning, we will remember them”

Other Derbyshire cricketers served in the armed forces during World War I and World War II as follows;

Derbyshire Cricketers who served in the Great War 1914-18

Richard Romer Claude Baggallay captained Derbyshire 1913-14. During the 1914 August Bank Holiday match against Essex at Derby he received a telegram from the Army whilst he was batting which read “Adjutant – Mobilise.” Baggallay said: “I showed the telegram to the Essex captain, J.W.H.T Douglas, and we agreed that we must abandon the match unless it ended that day, which it did.” Eight days later he was in France. During the conflict Lieutenant-Colonel Baggallay was awarded the MC and DSO.

Guy Rolfe Jackson captained DCCC 1922-1930. Served in Macedonia and Salonika with Derbyshire Yeomanry. Reached the rank of Captain and was awarded the Military Cross, the French Legion d’Honneur and the Greek Military Cross for gallantry on the field of battle. Twice mentioned in dispatches. It was in Salonika that, while leading his troops, he was approached by Bulgars carrying a flag of truce. They asked for an armistice and Jackson sent them to headquarters. It was the end of Bulgaria’s participation in the war.

Christopher Lowther played in club and ground matches, and it was thanks to his generosity that the Nursery was established in 1914, with Blacklidge appointed coach. Served with Westmoreland and Cumberland Yeomanry, receiving a severe wound in France in September 1915.

William Ferguson Parrington played 1926. Was awarded the MC for conspicuous gallantry at Ypres.

Walter Reader-Blackton played 1914-21. Enlisted in the Sherwood Foresters, he was commissioned in the Leicestershire Regiment and won the MC.

William Thomas Taylor Secretary 1908-59 – 51 years, 149 days. One of the first to enlist he was badly wounded on the Somme, July 1916. Returned to France only to suffer a further wound. Captain W.T. Taylor was about to be promoted Major when he was demobilised in 1919. From a Wirksworth family, Will Taylor lost two brothers in the 1914-18 war. He also played four times for Derbyshire.

Among other players who also served in the 1914-18 war were:

Derbyshire Cricketers who served in the Second World War 1939-45

When considering war service in 1939-45, note that that the county then had many coal mines. Mining and related occupations were essential for the war effort and although miners may have wanted to join the Forces their work was too important.

During the war, the pavilion and County Ground at Derby was used by war organisations.

Robin Buckston Invalided out from the Army as a lieutenant after ill health. Then Captain and Adjutant Home Guard.

Donald Carr Joined the army at the age of 18 in January 1945 as an officer cadet. War ended in August 1945 before he could see active service

George Dawkes Worked at Armstrong Whitworth before called up to the RAF.

Charlie Elliott Although accepted for the Royal Navy, he served in National Fire Service.

Arnold Hamer Served in the Army in Malta.

Gilbert Hodgkinson Captain Sherwood Foresters, then joined Highland Division. Received severe head wound in France and was in a hospital in Fecamp when the Germans seized it. Was well-treated and repatriated via Sweden in a prisoner exchange in 1943. The 1941 edition of Wisden recorded his death, although fortunately his wife and family had received news he was missing three months’ earlier.

Bert Rhodes Lance Bombardier in the Royal Artillery in North Africa and Italy.

Ken Shearwood Joined the Royal Navy and served in destroyers. As the commander of a tank landing craft at Salerno and Anzio in Italy, was awarded DSC.

Guy Willatt Commissioned in the Royal Artillery, served in North Africa and Italy.

Stan Worthington Served with light anti-aircraft unit in Gibraltar, then commissioned in Royal Electrical and Mechanical Engineers (REME) where he rose to rank of Captain.