Derbyshire’s remarkable run to Vitality Blast Finals Day kicked up a gear with victory over Lancashire at Old Trafford to seal a second quarter-final spot in three seasons.

The Falcons went into the final group game knowing that a win would guarantee a knockout place and with no thoughts of relying on other results, a trio of senior stars stepped up to secure victory.

Lancashire, who were aiming to entertain a record crowd for a non-Roses fixture, had only lost one of their 13 group matches heading into the Bank Holiday encounter.

Deciding to bat first and set a total which he backed his varied bowling attack to defend, Billy Godleman won the toss and stepped out to the middle with Matt Critchley.

The latter struggled to get going against the spin of the experienced Steven Croft and when he was caught for four, that brought Wayne Madsen to the crease in the fourth over.

Sweeping the spinners and powerfully pulling the pace of Liam Hurt, he set about compiling the highest score of the match – 69 off just 39 balls, including six fours and three sixes.

Along with Godleman, the pair added 112 for the second wicket, the captain also making a half-century, before Madsen was caught off Glenn Maxwell in the 16th over with the score 129-2.

Alex Hughes chipped in with 22 not out off 14 deliveries as Derbyshire posted 162-3 in their 20 overs, setting up a tricky chase for the hosts on a big outfield at Old Trafford.

New Zealand quick, Logan van Beek, had Alex Davies caught with the second ball of the innings, before Rampaul dismissed Croft and Josh Bohannon in the fourth over.

Despite the loss of three early wickets, the hosts continued to score above the required rate largely due to Liam Livingstone’s 58 off 36 balls. Over halfway through the chase and the Lightning were on top, Derbyshire knowing that taking wickets was their best chance of slowing the run rate.

A tight spell of pace-off bowling across Reece, Hughes and Critchley added pressure to Livingstone who eventually edged behind to Daryn Smit off Hughes in the 13th over, still with 64 runs needed.

Keaton Jennings, set at the other end, also fell with the score on 99 and Derbyshire had managed to turn the tide in the space of three deliveries.

Lancashire’s depth meant that Maxwell, Dane Vilas and James Faulkner all still posed highly credible threats with the bat, but further good work from Rampaul – who was going at less than five runs per over – and the Derbyshire fielders, meant that the hosts were soon 147-8 with all recognised batsmen back in the pavilion.

It was fittingly left to Rampaul to close out the victory with a tight final over during which he also claimed his third wicket, Lancashire finishing on 151-9 to give the Falcons an 11-run win.

The quick-scoring to all parts from Madsen, coupled with the poise of Godleman’s knock and the unerring accuracy of Rampaul rounded off a deserved Derbyshire victory and set up an away quarter-final, only the third knockout-round match in T20 cricket in the club’s history. 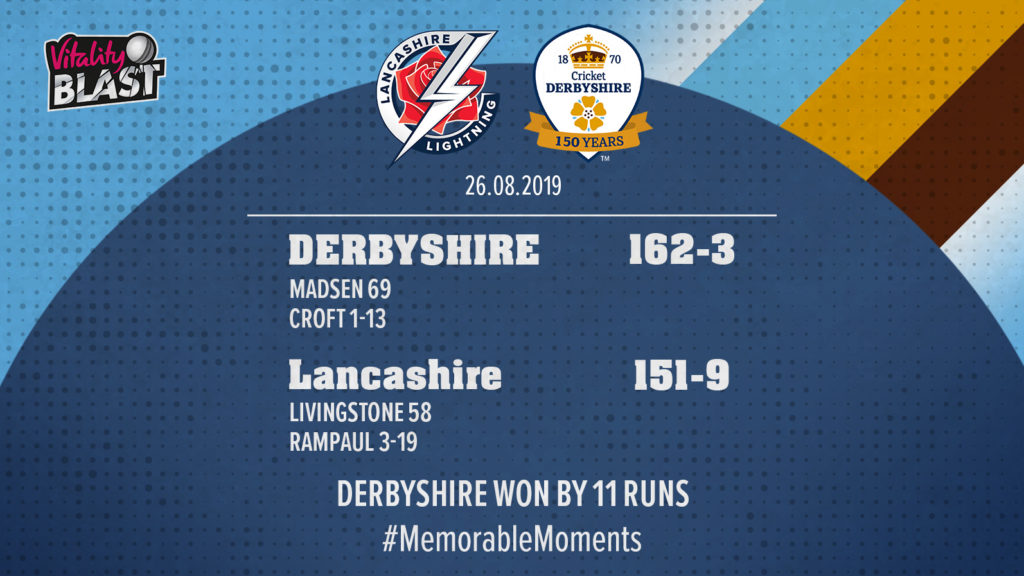 Together, We Are All Derbyshire. Share memories, favourite moments and engage with fellow supporters. Get in touch on social media, at info@derbyshireccc.com, or call 01332 388 101. Click HERE to enjoy more Memorable Moments.