Derbyshire’s fixtures for the 2021 Vitality Blast and Royal London Cup have been confirmed.

As the 2021 campaign draws closer, the Falcons have discovered their schedule for the season, with the Vitality Blast season beginning on Wednesday 9 June with a trip to Emirates Old Trafford to face Lancashire Lightning.

Having reached Finals Day in 2019, Billy Godleman and the side will be relishing the return of Twenty20 cricket to Derbyshire, which comes on Sunday 13 June, with the visit of Birmingham Bears to The Incora™ County Ground.

The Falcons will also renew their East Midlands Rivalry with Notts Outlaws, first travelling to Trent Bridge on Friday 18 June, before the reverse fixture takes place in Derby, under the lights, on Friday 25 June.

Big-hitting Australia international, Ben McDermott, will join the side for both white ball competitions, and he will get his first taste of Queen’s Park on Sunday 18 July, as the Falcons round off their North Group schedule against Yorkshire Vikings, against whom they hold a three-game unbeaten run in Chesterfield.

Derbyshire are scheduled to play at the picturesque setting under the spire three times this year, subject to safety guidelines and regulations, with the Yorkshire Vikings clash coming at the end of the BRM Solicitors Chesterfield Festival of Cricket, which also sees reigning Bob Willis Trophy holders, Essex, visit for an LV= County Championship encounter. 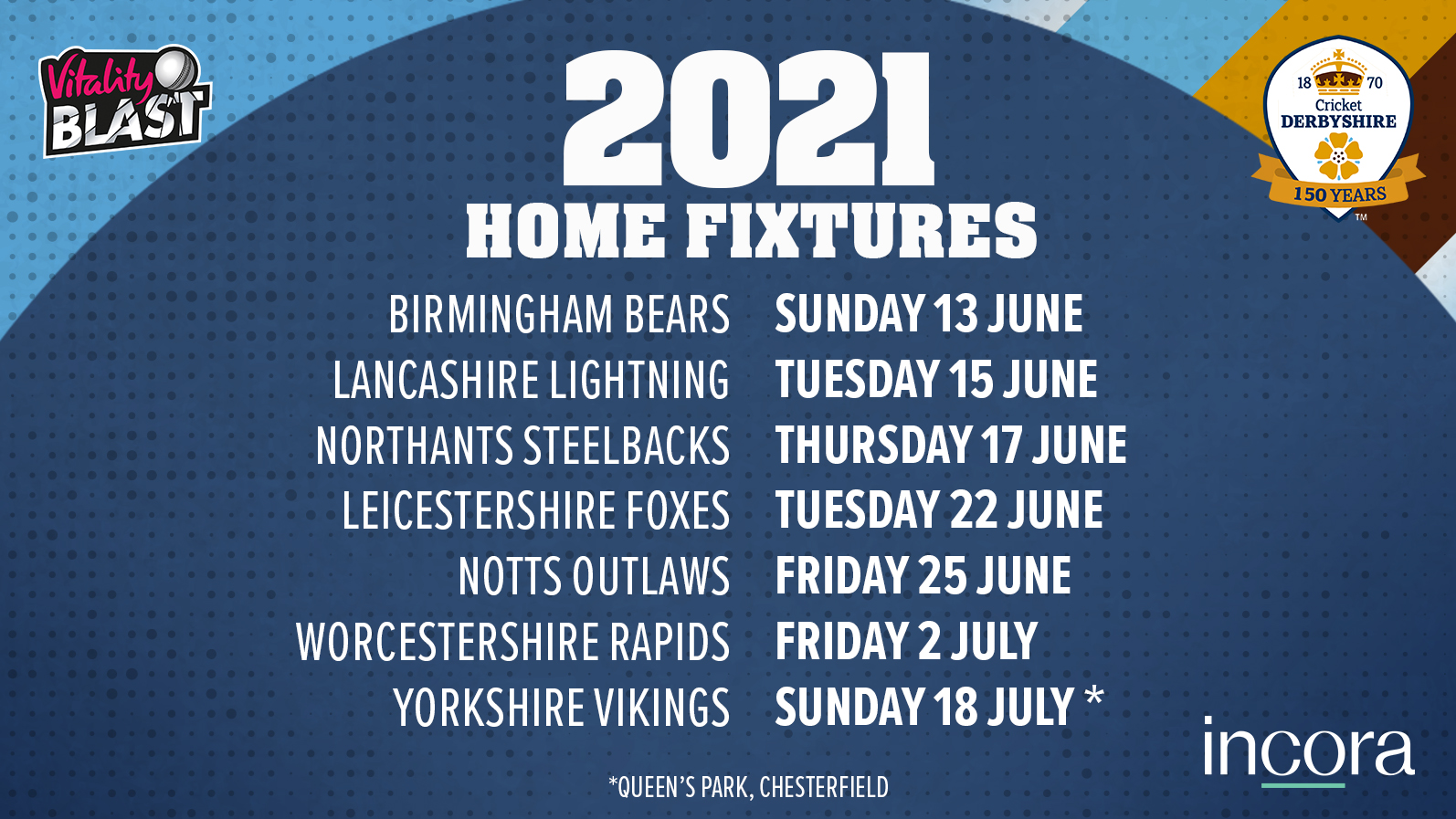 Derbyshire will also host Yorkshire in Chesterfield in the Royal London Cup, with the competition’s fixtures announced today.

Godleman was the leading scorer in the 2019 50-over competition, scoring three centuries in-a-row and averaging a mammoth 74.42 on his way to 521 runs, and he will be hoping to build on that success alongside the likes of McDermott, Matt Critchley and an exciting bowling attack.

The Royal London Cup campaign will begin on Thursday 22 July, with Derbyshire travelling to face Leicestershire before returning to The Incora County Ground for matches against Glamorgan and Surrey.

Derbyshire’s away fixture versus Nottinghamshire is scheduled to take place at The Incora County Ground on Wednesday 4 August with Trent Bridge playing host to England’s first Test against India.

With priority entry to all home group matches at less than £13 a game, a Blast Pass is the best way to enjoy explosive Vitality Blast cricket in Derbyshire next season, and with our Blast Pass guarantee, you can buy with confidence.

Vitality Blast Pass! Back the Falcons in 2021 and watch every home Vitality Blast group game for just £89. Buy now and save over 30%.