As those of you who were able to join the last Members’ Forum will know, I promised to write to you all with details of a proposed change to the structure and format of the 2021 cricket season so that you have an opportunity to express your opinion.

While the players, coaches and the Supervisory Board are in favour of the proposed format – for the 2021 season only – the Board feels that it is most important that we invite our Members to comment on the plans before I cast the Derbyshire County Cricket Club vote in the next few weeks.

The Professional Game Group (PGG) were asked by the ECB to come up with a proposed format for the 2021 season which provided a competitive red ball cricket season and at the same time was flexible so that it could be easily adjusted if we are still restricted by the current health crisis.

Each club would play the others in its conference home and away producing 10 matches in all. The clubs finishing first and second in each Conference would then be allocated into Division One for the second half of the season, those finishing third and fourth in Division Two and fifth and sixth in Division Three.

Each club would play the four counties which came from other conferences once. As the club from the same group had already been played twice, the average of the points won in those two games would count as the fifth game in the division. Prize money would be allocated for all 18 Clubs, the winners of Division One receiving the top prize and sixth placed in Division Three the least.

There would also be a showcase five-day final at Lord’s, with the top two clubs in Division One competing for the Bob Willis Trophy.

Please see the below diagram for an illustrative view of how the groups would work. 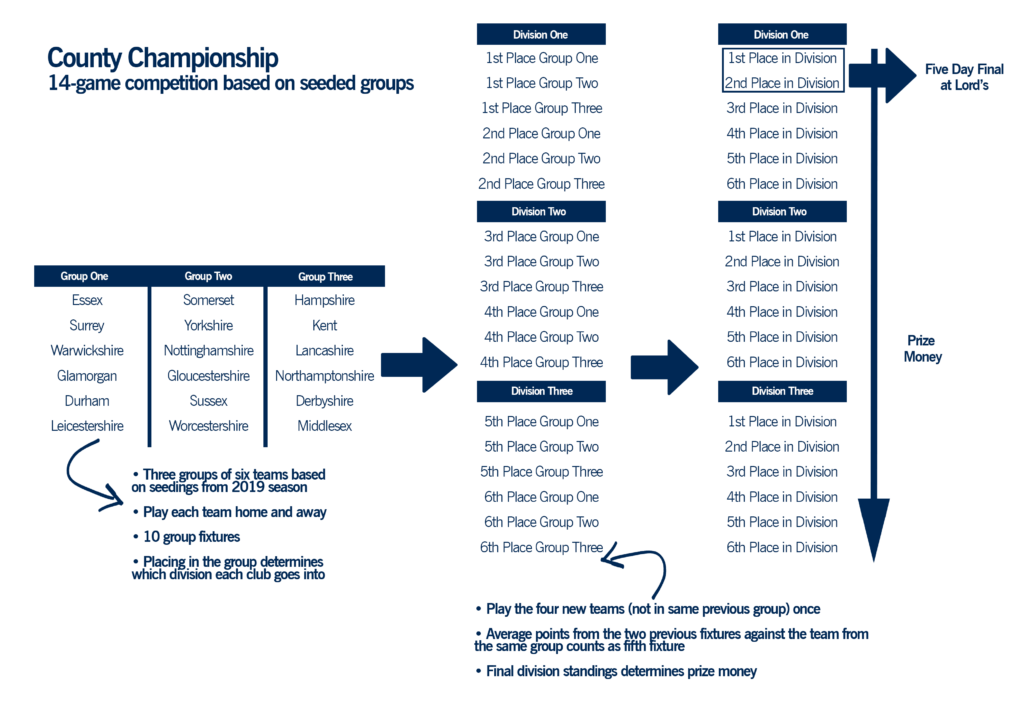 *Seedings subject to change. The vote is regarding the conference system only, not the counties within each group.

The Derbyshire Players, Coaches and Board would support the conference system for the 2021 season as we believe it will be more competitive than the current Championship, would give every club a chance of being the Champion County, gives Members and spectators a chance of seeing clubs and players that they would not normally play and, if adopted long-term, might give the smaller clubs a better chance of retaining their better players than the current divisional structure. There seems to be overwhelming support for the format amongst other clubs as well.

However, we have reservations about the need for, or the value of a showcase final at the end of the season as it is unfair to make the Champion Club play off for a trophy at the end of the season when weather, pitch conditions etc. might influence the outcome to a greater extent. That club will already have proved over the 14 games that it is the best in that season.

If you wish to express an opinion on the conference proposal we will be very pleased to receive it so that I can cast the Derbyshire vote with a clear idea of your views on the matter.

Please submit your feedback via the form at the bottom of this page. A vote is due to take place between the 18 counties in late October, so please send your feedback within the next 14 days.

Many thanks for reading this letter and most of all for your valued support.

Submit your feedback via the form below.