Please use the form below to register for Derbyshire County Cricket Club’s Special General Meeting, which will take place on Tuesday 3 November (7.45pm) via Zoom.

After submitting the form below, you will be sent a link to join the meeting up to 24 hours prior to the SGM taking place. If you do not receive the link before the morning of 3 November, please contact us on 01332 388 101, or email [email protected].

Following the SGM will be a short Members’ Forum, including an update from Chairman Ian Morgan and a Q&A with Cub President and former opening batsman, John Wright.

Use the form above to submit your questions for Wright, while there will be the opportunity to ask further questions via the text chat facility on the night.

Below is a reminder of Chairman Ian Morgan’s letter to Members w/c 14 September:

As indicated in my letters / emails to Members at the end of April and the beginning of June, the Supervisory Board’s Governance Group has been tasked with assessing the changes we need to make to the Club Rules and our governance structure to ensure we are compliant with the ECB’s Governance Framework for first-class counties.

With over 50% of our income coming directly from the ECB – and the potential to apply for additional funding via both the Infrastructure Investment Fund and Community Investment Fund – it is essential that we make the necessary changes for the future of our Club.

The County Partnership Agreements (CPA) are the contracts determining the roles and funding distributions between ECB and its County partners for the period 2020-24. As part of these agreements, the ECB has developed a set of standards that sit within the CPA to which all county cricket organisations will be held accountable. This Framework represents one aspect of the CPA Standards.

The Framework focuses on the structures, practices and people at the most senior levels of our game. It is inspired by the Sport England Code and tailored for cricket, allowing for proportional implementation across cricket’s different organisations. It was developed by a cross-game working group and guided by extensive consultation with those in governance roles across cricket. It is intended to be common-sense and flexible, building on cricket’s current structures.

The framework is designed to encourage progression from core standards to best practice. The framework contains three levels of requirements, bronze, silver and gold.

Gold or “best practice” requirements represent advanced and mature governance that will be considered best practice across cricket and wider sport. Gold requirements are aspirational and will not be mandatory as part of the CPA.

All clubs are expected to achieve the silver level by no later than February 2022.

Despite the Covid-19 situation, the ECB has suggested there will be no flexibility with the February 2022 deadline for compliance with the minimum ‘silver standards,’ therefore it is essential that we progress with this Governance Review.

The Supervisory Board’s main focus is to make essential changes to the Club Rules this year, in time for next year’s Annual General Meeting, to ensure the Club’s Board structure meets the required standards.

The new Board will then have sufficient time to focus on other elements of culture and essential good practice, to be introduced during 2021 ahead of the ECB’s February 2022 deadline.

Thankfully a large number of Derbyshire’s rules and governance already comply with much of the bronze and silver requirements and even some of the gold, but the Governance Group has concluded, and the Supervisory Board agrees, that there needs to be some changes to the Club Rules and the culture and practice of the Board that impact on the constitution of the Club, to achieve full compliance.

In my initial correspondence relating to Governance in April, the proposed essential changes to Club Rules to comply with the Governance Framework document were summarised as follows:

17 Members responded with comments to the draft proposals, the majority of which were very supportive. There were however, a small number of suggested amends and improvements to the proposals which were shared with the Governance Group for consideration and also discussed in detail with the ECB’s Governance Team.

This consultation with Members has been valuable and I would like to thank all the Members for their comments. I believe some of the recommendations will improve what we have proposed, allow us to make the appropriate amends to Club Rules and comply with the ECB’s Governance Framework.

The amends to the initial proposal include:

All within the purpose of the Board

Following discussion and a review of ECB Framework, Members’ consultation and feedback from the ECB, the Governance Group has drafted the amended proposed Club Rules which should be voted on prior to the Special General Meeting on 3 November.

The proposed revised structure of the Supervisory Board included in Rule 10 can be summarised in the following organisation structure: 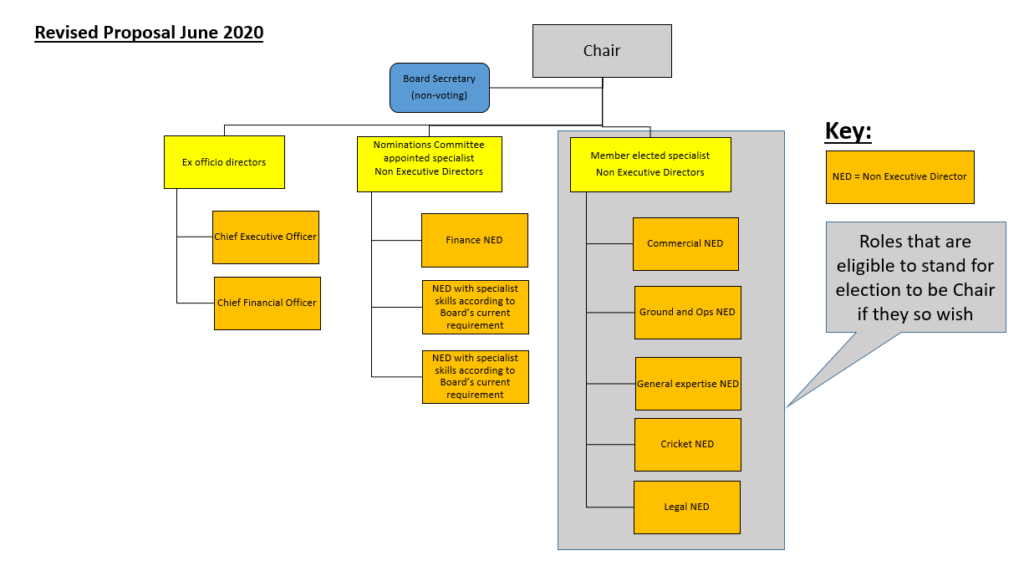 The amended Club Rules include the changes highlighted above and a number of smaller, essential amendments throughout the document, to reflect the key changes that have been made.

The Governance Group and Supervisory Board recommend that all Members read the proposed new Club Rules in full before voting so they fully understand the changes being proposed and how they impact on the constitution of the Club.

If you have any questions on any of the proposed changes please email our Chief Executive at [email protected] or call 01332 388101.

It is proposed that the new Club Rules will take effect from the 2021 AGM, which is scheduled for Wednesday, 31 March 2021.

The proposed new Rules will hopefully be approved at the SGM on 3 November 2020 from which point there will be a transition process until the 2021 AGM to include the formation of an interim Nominations Committee.

The Supervisory Board has approved the following Governance Review Timeline:

As detailed earlier, due to the ongoing Covid-19 situation and the ECB Governance deadline, we are having to host the SGM on Tuesday, 3 November digitally however, the same protocol will apply with all Members requested to return their signed voting form to the Club no later than 5pm on 30 October 2020.  Enclosed in this pack is the appropriate ballot paper and a pre-paid envelope.  Each envelope will remain un-opened and will be opened and counted by the Club’s auditors, Smith Cooper.

The result of the vote will be announced at the SGM and, as detailed in Rule 18.2 of the existing Club Rules, a two thirds majority is needed to vote through any amendments.

How to Join the SGM & Members’ Forum

The meeting will take place via Zoom video link. A direct link to join the forum will be sent via email to those who register.

We advise Members to download Zoom’s free video conferencing software in advance and to make a free account. This will allow you to easily join the meeting on the day.

Participants will be automatically muted on entry and are asked to remain on mute in order to allow the Chair and Supervisory Board to conduct the meeting.

A text-chat facility will be available to communicate with the host.